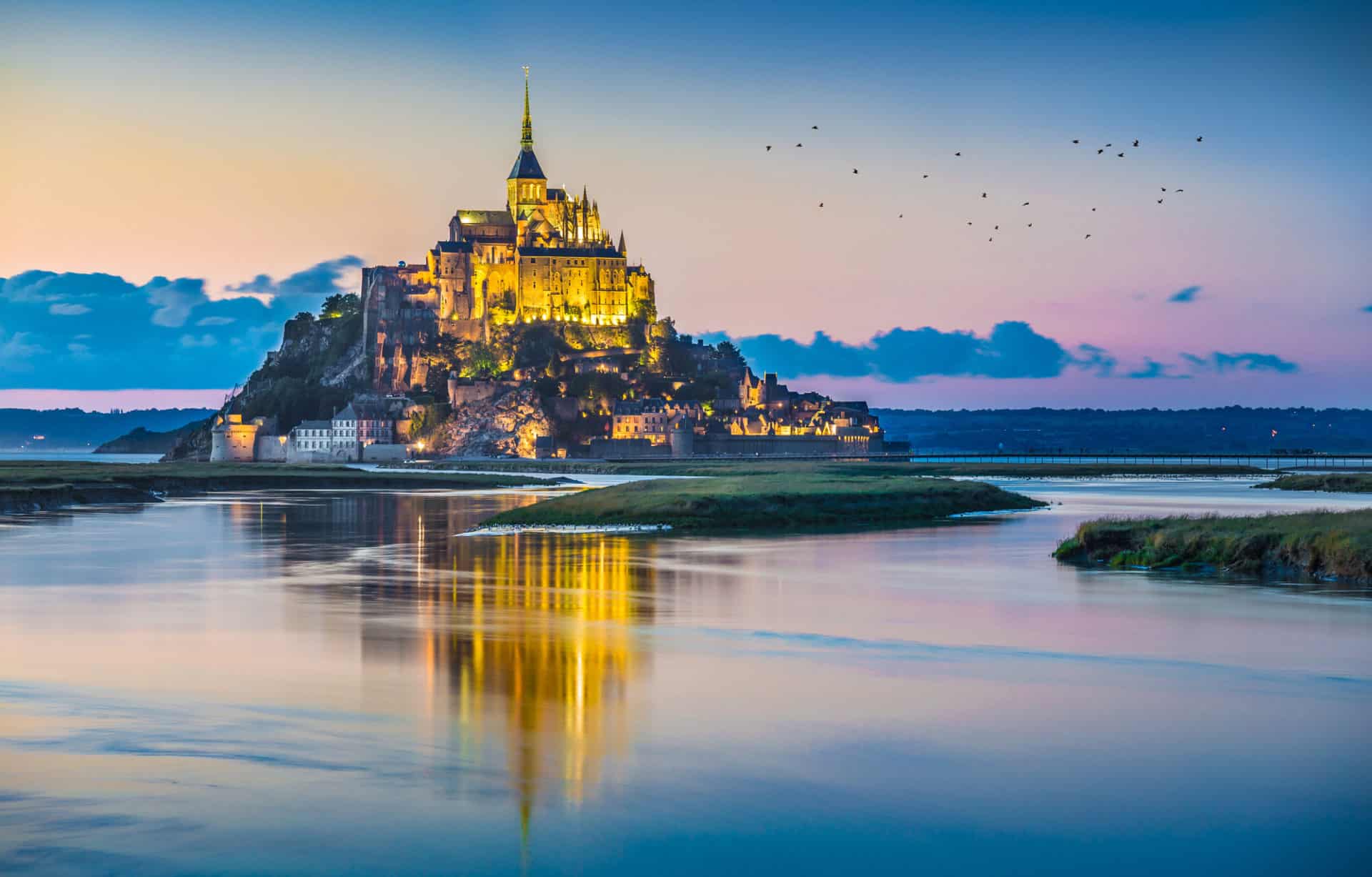 Paris is a beloved tourist destination, however many people who visit find themselves wanting to know more about the France that lies beyond the arrondissements of Paris. If you are craving the chance to experience French life away from the capital, or perhaps just desiring a little more peace and quiet, you’ll love the options for daytrips from Paris.

As Paris lies inland but towards the top of France, there is no shortage of possible daytrips in every direction. Plus, France is so full of picturesque, beautiful villages that it’s difficult not to enjoy yourself in Paris’ surrounding areas.

Another reason why daytrips from Paris are so enjoyable is because France has an excellent network of comfortable high-speed trains which make travel throughout the country very efficient. Even if you do not have a car, you will not feel restricted when looking for daytrips from Paris.

In fact, the hardest part about a daytrip from Paris is narrowing down exactly where you want to go – there’s just so many fabulous options. To help you get started, here are eight of our best daytrips from Paris, the City of Love.

#8 – The Palace of Versailles, the City of Royals

We’ll start with the most obvious daytrip of all: a journey to the City of Royals, Versailles, which lies just 23 kilometres (14 miles) away from Paris. Although Versailles is perhaps most famously known as the home of tragic queen Marie Antoinette, it has actually housed a number of famous French monarchs over the years.

As is generally the case with homes of monarchs, the Palace in Versailles is incredibly grand and elegant, with incredible rooms such as the Hall of Mirrors. As well as the truly enormous castle itself, there are also beautiful gardens which are the perfect place to enjoy a packed lunch (featuring a baguette and French cheese, of course).

Getting to Versailles from Paris is easy. There are many tour companies that run daytrips, or simply get the metro from Gare Montparnasse to the closest stop to the Palace of Versailles, which is called Versailles-Château – Rive Gauche. We recommend purchasing your ticket to the palace online [http://en.chateauversailles.fr/plan-your-visit/tickets-and-prices] beforehand, to avoid the queues.

#7 – Giverny, the Home of Impressionism

France has been the home of many famous painters, and is perhaps most well-known for being the birthplace of the style of painting known as impressionism. This style of painting is specifically thought to have started in the village of Giverny, which is approximately 74 kilometres (46 miles) from Paris.

Giverny is proud of its reputation as the birthplace of impressionism, and its beautiful cobbled streets are filled with galleries and museums devoted to the style. Perhaps the most famous attraction of all is the home of Claude Monet, one of France’s most famous painters. Wandering around the beautiful gardens, it is clear to see where Monet got the inspiration for his classic paintings such as the Water Lilly Pond.

To get to Giverny from Paris, you should first take the train from Gare Saint Lazare to the town of Vernon. In Vernon, you then change for a bus to Giverny, which should take about 20 minutes. You can purchase tickets to Monet’s Home ahead of time online [http://giverny.org/gardens/fcm/ticket/] so as to have more time to enjoy Giverny and less time in line!

For a moving daytrip from Paris, we suggest travelling approximately 220km (136 miles) north west to Normandy, one of the most well-known regions of France. As well as being a beautiful and historic region, Normandy was also the location of some of the most brutal fighting during World War Two, and continues to pay homage to this period.

Normandy is the sight of many expansive grave sites, and the white crosses devoted to fallen soldiers from places including Britain, Australia, the United States and Canada are a sobering sight. However, the Normandy region is also rich in natural beauty, with the beautiful cliffs of Étretat, as well as culinary delights, being the place to go for delicious fresh oysters and seafood.

If you wish to explore the Normandy region, we suggest renting a car as it is not well serviced by public transport. However, if you simply wish to see the grave sites and D-Day Landing area, you can take the train from Gare Saint Lazare to Bayeux, which takes approximately 2.5 hours.

This daytrip is not quite as easy as the options above, but the high-speed train makes the 360 kilometre (223 mile) journey doable in a day. Once you arrive at this stunning, twelfth century abbey perched on an island, you are sure to feel that the journey from Paris has been worth it!

Mont St Michel is one of the most recognisable views in France, and looks like it has been torn from the pages of a fairytale and perched on France’s north coast. The abbey is the most famous site on the island and the walk to it is beautiful, however also leave plenty of time to explore the rest of the island and marvel about what everyday life there must be like.

Getting to Mont St Michel for a daytrip from Paris means getting up very early, but you will be rewarded! Take the early morning train from Gare Montparnasse to Dol de Bretagne, which takes about 3.5 hours. From Dol de Bretagne, catch the bus to St Mont Michel. We recommend paying extra for the audioguide when you arrive, to hear more about this intriguing place.

This medieval city is a perfect example of a historic French town, with incredible buildings and a hodgepodge of cobbled streets. However, there is a dark side to this pretty town located about 132 kilometres (82 miles) from Paris – it is where Jeanne d’Arc was burned alive in 1431.

Historians believe the city is more than a thousand years old, and you certainly feel this as you wander the streets with its famed historic architecture. However, the most famous sights relate to heroine Jeanne d’Arc, including the site of her execution (Place du Vieux Marché) and the tower where she was imprisoned (la Tour Jeanne d’Arc), as well as the beautiful eleventh century Cathedral.

To get to Rouen from Paris, simply take the train from the Gare Saint Lazare train station – they go frequently. The train goes straight to Rouen, making it a straightforward daytrip from Paris.

#3 – Loire Valley, the Valley of Castles

France is well known for its beautiful and historic castles, and nowhere has more of them than the beautiful Loire Valley some 213 kilometres (132 miles) from Paris. In this beautiful region, you can find many stunning castles that were once inhabited by France’s social elite, including some royals.

There are many beautiful castles but it is perhaps the striking Château de Chambord which is most famous in the area. A beautiful, gothic style building that rises up from its immaculately manicured gardens, it welcomes tens of thousands of visitors every year. Amazingly, the garden of Château de Chambord is bigger than all of inner Paris!

Most people visit the Loire Valley with a car, so that they can see other castles in the area. However, a tour company runs a shuttle bus between Paris and the Château, which is a good option if you do not have access to a vehicle (https://www.pariscityvision.com/en/france/loire-valley-castles/chambord-castle).

Okay, so perhaps it is not quite the place to experience authentic French culture or get a glimpse of what life in France is like. It is, however, an incredibly fun place for both the young and young at heart, and is located just 40km (25 miles) from downtown Paris.

As you would expect from France’s Disneyland, Euro Disney offers many different rides and attractions based around lovable characters such as Mickey Mouse, Sleeping Beauty and the pirates from Pirates of the Caribbean. It has many famous rollercoasters to get the adrenaline pumping, such as Space Mountain and the Ghost Manor.

The RER A train runs frequently between Paris and Marne-la-Vallée/Chessy station, which is just a two-minute walk from the entrance to the park. The train departs from numerous stops in Paris, including Charles de Gaulle airport and Gare de Lyon. Be sure to book your tickets online [http://www.disneylandparis.co.uk/] ahead of time to skip the queues.

Some might say that it is Reims, not Disneyland, that is the happiest place on Earth on account of the fact that it is considered the home of French champagne. Located approximately 143 kilometres (89 miles) from Paris, it is a comfortable daytrip.

In Reims (pronounced more like a soft, nasally “rhonce”), you will find the cellar doors of legendary champagne producers such as Pommery, Mumm and Veuve Clicquot. While visiting, you can learn more about the traditional methods for creating French champagne and also try many different varieties. If you can drag yourself away from the champagne, Reims also has a beautiful Cathedral which is where several monarchs were baptised.

We recommend getting a tour or public transport to Reims so that you can taste the champagne without worrying about someone needing to drive back. There are many excellent champagne tours, or simply get the train from Gare de l’Est to the station Reims Gare. Once you’re in Reims, you can get a cheap Uber to the cellar doors or simply walk.

So, there you have it – eight of our favourite daytrips from Paris. Which of these would you like to try?