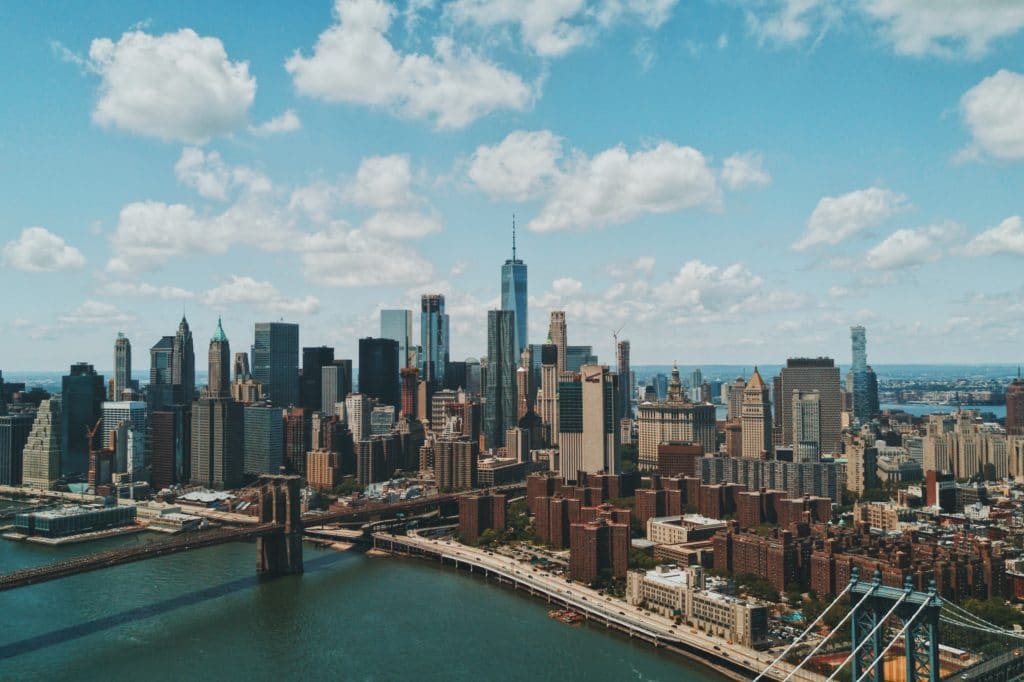 New York is the most intoxicating city at every turn

Everyone remembers New York for the infamous disaster on 9/11, but thankfully, the city that never sleeps remains one of the most exciting travel destinations for all the right reasons. In fact, most visitors will feel overwhelmed with these reasons as there is no end of attractions and popular things to do in New York. From general sightseeing opportunities such as the Empire States Building, Times Square and the Statue of Liberty to shows on Broadway, pizza, hot dogs and Central Park; the Big Apple is a whirlwind experience from start to finish.

Yes, there is nowhere quite like New York and there is also no end of reasons for why this is widely regarded as the most fascinating city in the world to spend a few days. Here we take a brief look at the many attractions, places to eat and things to do in New York which make it such an intoxicating travel destination.

Although hot dogs and pizza are more closely related to fast food or an unhealthy lifestyle, they are nonetheless a part of the NY experience. Local street sellers are easy to access for a bite on the go, but there are also a ridiculous number of fine establishments which offer a more upmarket version.

Except it would be a myth to consider these the staple foods in modern day New York and reality, this is also home to a world class food experience on every level. Yes, the street food is unbelievable with everything from tacos and smoothies to meaty kebabs, but the long lineup of restaurants is also overwhelming, to say the least.

The Odeon, Spicy Village, and Le Coucou are examples of how quickly the style of these eateries can change while Uncle Boons and Katz Delicatessen ensure the homemade side of food is still at large in the city center. From one end to the next, the shift of culture also means that the food changes with places such as Little Italy being an experience in itself. Either way, you will love the variety of neighborhoods and food in New York so let’s hope you have enough time to explore both.

An aesthetically perfect place to be

Exploring the vast number of famous landmarks in New York can take days, and this only refers to the major points of interest, for this famous city skyline is the most photographed for a good reason. However, when you take a closer look, the true variety of architecture and appearance in New York is the undisputed reason for what makes it so special.

Traveling on a ferry past Manhattan, it is easy to see why and you can step onto Ellis Island from here to look up at the immense Statue of Liberty. Back in the city, you can travel by elevator to the top floor of the Empire States Building and downtown in Wallstreet; you should witness a very real insight into the financial capital of America and the devastating act on 9/11. Meanwhile, at Central Park and the Brooklyn Bridge, you can see for yourself that this city is every bit as impressive as it appears on television and so yes, this enigmatic city is a contemporary visual masterpiece where a melting pot of cultures can be found in the facades of every neighborhood.

Times Square can feel like a video game the first time you step out into this urban masterpiece. Decorated from top to bottom with video screens and marketing millions, it’s easy to understand why so many hopeful artists come here in search of stardom and how the first glimpse of these city lights live up to their expectations.

However, it is not just the lights on Times Square that excite visitors but rather the incredible assortment of entertainment options on offer. Not far from here you will find the infamous Broadway which is known for a plethora of big name shows and performances. On every corner in between, you can find agencies offering unique experiences, even if some are expensive such as a helicopter ride above the city. And in the middle of this, you have Central Park where walking, hiking, biking picnics, and performances are all common amidst probably the only green space in the city.

Regardless of where you go, New York continues to be the most entertaining city on the planet and a travel destination in which boredom has no presence whatsoever.

Day tours and something for everyone

While this has got to be the absolute best destination to explore on foot, travel around New York is also made extremely by the hundreds of tour buses which make their way up and down Manhattan every day. Stopping at pretty much every point of interest on the island, these are not only useful but also a very affordable way to squeeze as much as possible into a few hours.

Another highlight is the previously mentioned ferry ride to see the Statue of Liberty on Ellis Island which covers a little bit of history at the old immigration hall and possible the best view of the city skyline. Take a ride to the “Top of the Rock” downtown, check out the Guggenheim Museum or wander into Harlem on a walking tour where you can hear the voices of Harlem Choir soaring in the city streets.

Whether you find yourself amidst the glowing architecture of Grand Central Station or mixing it with locals in the New York Public Library, day tours are an excellent way to get underneath the skin of this energetic city, and you should have no trouble finding one to suit your interests.

While remnants of unfortunate events are still present around this metropolis, the city that never sleeps has gone a long way to thriving in the face of adversity. Featuring an incredible array of food venues, fascinating attractions, highly enjoyable entertainment, endless day tours and a melting pot of cultures, New York proves itself to be the most intoxicating city at every turn.

30 Things to do in Montreal